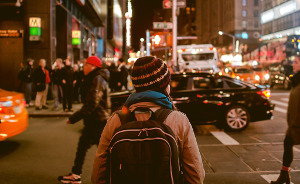 How are you? How is your week going? Your Word of Encouragement is coming to you a little early because of the holiday. So… to start us off… have you sought the welfare of your community these past couple days?
During the sermon this past Sunday, I mentioned shoveling your neighbor’s sidewalk as part of seeking the welfare of your community. I feel like God is seeing if we will walk the talk and listen to His word by sending us this snowstorm. I pray that all of you are safe and warm! And when you get the chance, seek the welfare of your city!
Jeremiah was writing to the exiles, Israelites who were forcibly displaced out of Judah and into Babylon. They were in a foreign land with a foreign language and a foreign culture. They were brought to the nation as slaves and captives. So many died. Friends were killed. Families were separated.
And it was to these people that Jeremiah told to seek the welfare of the city. They were called to settle there and be a blessing. They would fulfill part of the cultural mandate by seeking the welfare of that city. They were called to be a blessing to their captors, masters, and enemies.
We are exiles as well. We live in a foreign land with a foreign culture: this world. Our identity is in Christ, and our home is in heaven. But in the same way, we are called to seek the welfare of our city and pray for it as well. We are called to this, even if we don’t like our neighbors or cities. We are called to do this, even when the cities are full of our enemies.
We can only do this, because we know the One who sought our welfare first. Jesus came from heaven and settled on earth in this life. He was the ultimate exile. He lived the righteous life that we could not live, and he died the death for us. He took on the ultimate exile on the cross, being exiled from His people, the government, and the Father Himself. He did all of this to seek our welfare.
Therefore, because He has sought our welfare, we are able to seek the welfare of the city and pray for it as well. Because He took on the opposite of welfare on the cross, we can receive the welfare of God and have it overflow into this world.
Take some time to reflect on this truth. Given the holiday in two days, take the time this week to thank our God for Christ and His seeking our welfare. Ask the Lord for grace as we endeavor to seek the welfare of our cities.
Have a great holiday, everyone! See you on Sunday for Lord’s Day Worship! Prepare your hearts for a better table than this Thursday: the Lord’s Supper on Sunday!
In Christ,
Pastor Tim
Photo Credit: Here